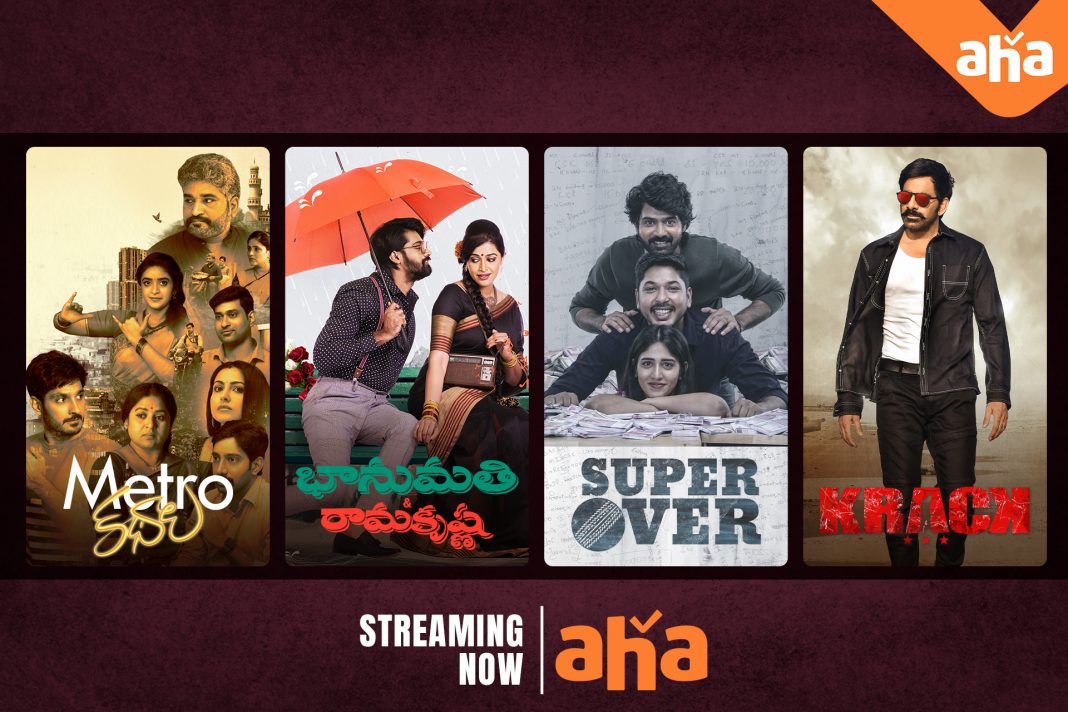 Reminiscing the past has always helped us, even when we’re thinking of the bad experiences; because every moment of our life teaches us something, and every situation comes with a silver lining. So, join us in our ride to the past through these best nostalgic Telugu movies you should binge only on Aha!

Metro Kathalu is a 75-minute anthology film shot during the COVID-19 era. It contains four short stories. Khadeer Babu of Onamalu renown wrote the storyline, while Karuna Kumar of Palasa fame directed this over-the-top film. Karuna Kumar was humble enough to say in a recent interview that this film was designed particularly for the OTT platform and that nobody would have seen it if it had been released theatrically. He contends, however, that all of these tales include elements of reality.

True to the theme – One City Four Stories – Metro Kathalu is comprised of four distinct sub-stories, each with its own title – Proposal, Ghatana, Selfie, and Tegalu.

Proposal is the narrative of two information technology professionals, Chandu (Thiruveer) with Abhirami (Nakshatra). Chandu proposes to Abhirami, and she accepts with several conditions.

Ghatana is the story of Manjula (Sana) and Varun’s (Ali Reza) unplanned one-night affair. Manjula, on the other hand, warns Varun not to see her again. Why?

Selfie is the tale of Supriya (Nandini Rai), a married lady who is dissatisfied with her career-oriented husband and chooses to become physical with a friend, Raghav (Ram Maddukuri), who has been following her for two years. However, when attempting to be intimate, she discovers a harsh reality.

Tegalu is the narrative of Abbas (Rajeev Kanakala) and Salma(Gayatri Bhargavi), a middle-class couple. When asked about his involvement in Tegalu by his wife and children. Abbas reminisces on some of the wonderful times he had with his father in the past.

Bhanumathi (Salony Luthra) is a 30-year-old software developer who is emotionally confused and lives a mechanical existence. She has had a rough breakup and is sad because her partner left her due to her age. During this trying time, she is assisted by a small-town boy called Rama Krishna (Naveen Chandra). Bhanumathi is usually enraged by Rama Krishna’s actions, but she eventually falls for him. The film’s whole plot revolves on how two individuals with disparate backgrounds and ideas fall in love.

Bhanumati Ramakrishna’s feel-good component is well done, and the narrative ensures that there are few dull moments. The settings, the development of love between a distinct main couple, and the talks are all shown in a very realistic way. Additionally, the calming BGM and music contribute to the effectiveness of the experience.

Naveen Chandra with Chandini Chowdary, who became household names with Bhanumathi Ramakrishna as well as Colour Photo, respectively, have teamed together for Super Over. Praveen Varma, the film’s director, tragically died halfway through production, and the remaining footage was filmed by the directorial team.

Kaasi (Naveen Chandra), Vasu (Rakendu Mouli), with Madhu (Chandini) are really close buddies. Kaasi intends to gain easy money by betting on cricket and succeeds handsomely, winning Rs 1.70 crores on the MPL betting site. Kaasi, together with Vasu and Madhu, attempt to get the money via money laundering, which gets them into serious difficulties. The events that transpire later in the exciting night comprise the remainder of the film’s narrative.

We get a peek of Bangararaju (Harsha, in a guest appearance) and his rags-to-riches journey via cricket betting. Kasi is drawn to betting by the possibility of instant money. Vasu, who has a secure career and a consistent salary, attempts to become the voice of truth and discourages Kasi, but eventually goes along and offers assistance. Naveen, Chandini, as well as Rakendu all, conform to the requirements of the director-driven picture.

The stakes increase exponentially after Kasi obtains a taste of victory and we witness him reveling in the experience, his manner exposing it all. He wins large, but obtaining the money will not be simple. A night-long pursuit ensues.

Veera Shankar (Ravi Teja) is a Krack guy who despises the term ‘background’ and would not leave someone till he sees their demise. He will also not accept injustice. He assumes three identities: that of terrorist Saleem, that of Katari Krishna, and that of Kadapa Reddy. What follows is the remainder of the narrative.