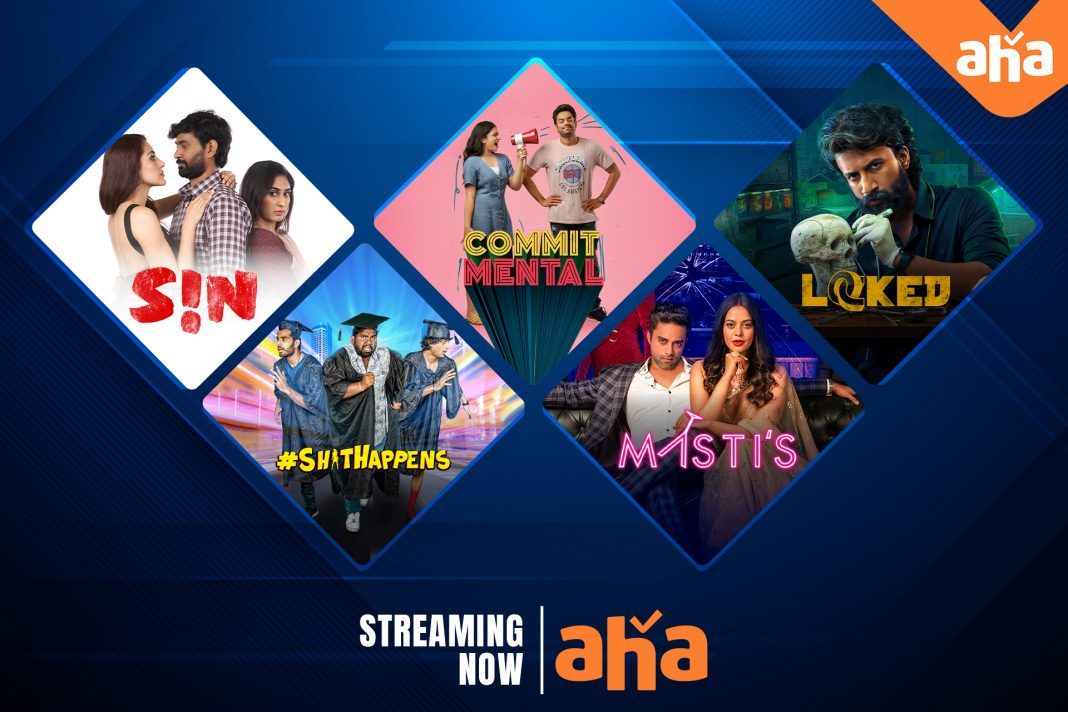 As much as people adore popular OTT platforms, they will always have a soft spot for local entertainment. That being said, in recent years, Telugu films have generated high-quality content, which has given a rise to the popularity of Aha! We offer a wide variety of films and television series. Below are a few of the best Telugu web series available on AHA, so kick back, relax, and enjoy.

Sin is a drama in its most refined form. However, not the mushy type you’re accustomed to seeing on television. Nanditha is a twenty-something-year-old girl from a middle-class household who is forced to marry an NGO worker by her parents.

Following that, she despised any kind of closeness from her husband, who sometimes pushed himself on her. Things hit the roof when she learns of her husband’s illicit relationship and discovers that he is not as nice as he seems. Want to know what happens next? Get an Aha subscription and find out for yourself!

Pavan Sadineni is the director of CommitMental, a television series. A three-year long-distance romance involving Phani and Anu takes a dramatic turn when he proposes to her in this rom-com Telugu web series on Aha. Will this rocky voyage bring them closer together, despite the numerous highs, lows, and bittersweet experiences? Udbhav Raghunandan and Punarnavi Bhupalam of Bigg Boss fame star in the series.

If you enjoy psychological thrillers that keep you on the edge of your seat, Locked is the series for you. Locked is a seven-episode criminal drama series helmed by Pradeep Deva Kumar that is now popular in Aha. Satyadev stars as Dr. Anand in the series.

A guy who is not what he professes to be, two thieves, and a few unexpected visitors find themselves stranded and barricaded within a mansion. Will they survive this voyage that is certain to leave even the bravest terrified, with the mastermind constantly one step ahead and ominous occurrences? What would keep you on your feet is how the night progresses and the plot develops.

An effort at adult humor, Shit Happens follows three college pals Harsha, Sameer, as well as Sathvik as they struggle to get intimate. They are uncomfortable lads who are unable to establish a proper conversation or rapport with women, or are unsuccessful in becoming friends with them, and for these and other reasons, they are labeled the “dry batch” by others of their class.

Harsha, Sameer, and Sathvik recruit a hooker to show them and everybody else wrong, only to discover her dead in their house. What happens next? As implied by the title, shit happens! If you’re searching for a frivolous comedy series to while away the hours, look no further. This show features Harsha Chemudu from the YouTube series Viva, so you know what to expect.

A straightforward romantic comedy about Geetha and Subramanyam’s live-in relationship, Geetha Subramanyam is a program that delves into their everyday lives and how they cope. The crowd adores the performance for its levity and unique view on relationships. While both Geetha and Subramanyam are endearing and amusing, every individual in the world has some defects. Watch how they cope with one another’s shortcomings and yet manage to live a happy life.

Masti’s is a narrative about six individuals who are motivated by desire, ambition, and greed in their contemporary relationships. A pub owner (played by Navdeep), his wife, a bar hostess, her superintendent, a singer, and even a model all have their lives inextricably linked to the bar in various ways, and their lives would never be the same with their hush-hush relationships now exposed. What happens next? Is there more danger in store for them? This audacious show is really worth seeing. Additionally, this series is directed by Krish Jagarlamudi.

When a simple person from a simple town moves to the city, he should contend with the city’s quick and ever-changing pace, which will put his intellect and strength to the test. Watch Raju in Kotha Poradu as he struggles to make ends meet in today’s cities, where everyone is vying for the top spot and no one will give you yours until you beg for it. The primary theme of the show is how an ordinary man becomes a greedy person in order to get to the top.